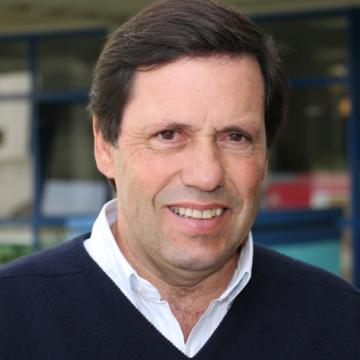 Rui Ferreira dos Santos was born in Lisbon, Portugal, in 1962. Rui has a Degree in Economics by the Universidade Católica Portuguesa (UCP), a MSc in Operations Research and Systems Engineering by the Instituto Superior Técnico (IST), and a PhD in Environmental Engineering/domain: Environmental Economics, by the Universidade Nova de Lisboa (UNL). He is Full Professor at Faculdade de Ciências e Tecnologia/Universidade Nova de Lisboa (FCT/UNL), Department of Environmental Sciences and Engineering, where he has been a lecturer since 1986. He teaches Environmental Economics, Ecological Economics and related courses in several PhD, Master and Post-graduate programs. Rui is a member of CENSE (Center for ENvironmental and Sustainability rEsearch), where he is coordinating the research unit in ecological economics and environmental management (ECOMAN). Main research interests include the design and evaluation of environmental policy instruments, with a special focus in economic and market-based instruments, and water and wastes markets regulation. He was coordinator and team member of several EU and national research projects, as well as studies and consultancy projects. Currently he coordinates the CENSE team in the EC-FP7 projects OpenNess and NETGREEN. Rui was a member of the Board of Directors of the Portuguese Institute for the Regulation of Water and Solid Waste Services (IRAR), from March 2003 to November 2006. Since 2010, he is a member of the Advisory Council of ERSAR (Portuguese Regulator of Water and Solid Waste Services – ex IRAR). Rui is an economist who has also worked as advisor of the Portuguese government, regional governments of Azores and Madeira, municipalities and public and private companies in the field of environment economics, with applications in several economic sectors (e.g. waste management, water supply and wastewater treatment, biodiversity conservation, energy, transports). He was nominated by the Portuguese government as coordinator or member of several working groups, and he was recently a member of the Portuguese Green Tax Reform Commission (2014). He was also representing the Portuguese Government in some international fora, like the WATECO group (EC Water Economics Working Group) established in the scope of the process of joint implementation of the Water Framework Directive. Rui is also, since 2010, President of the Partnership Commission of the Public Integrated Water Partnership of Alentejo (AGDA), Portugal, jointly appointed by the Minister of Environment and Spatial Planning and the Presidents of the 21 municipalities that integrate the system.